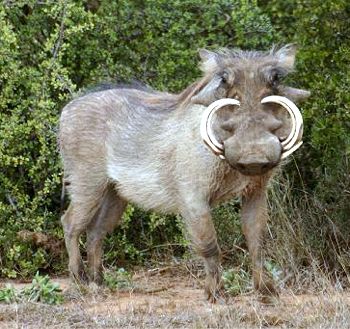 Although far from glamorous, if you saw the Disney movie "The Lion King" with it's warthog star PUMBAA, you can't help but smile when you watch them run in the African Savanna. When they run (actually trot) their tail is held straight up like an antenna and with the tuft of bristles at the tip of the tail it appears to be waving like a flag. Characteristic features of the warthog are the disproportionately elongated heads and distinctive facial warts. Males have 2 pairs of warts and females have only one. These warts are actually concentrations of cartilage that are believed to protect the eyes during fights or pushing matches between one another. The canine teeth form prominent tusks which grow outward and then curve upwards over the top of their broad, flat snout. The lower tusks are considerably shorter and pointed. They are kept sharp by contact with the upper set. A warthogs eyes are set high on their head which helps them to watch for predators even when it lowers its head to feed. In relation to the rest of its body the legs are short and slender. The warthog's skin is gray and sparse bristles cover the body. Longer bristles form a name from the top of the head down the spine to the middle of the back.

The warthog's large tusks are unusual. They are actually canine teeth. The upper tusks on the average are 8" long and thicker than the lower ones. The lower tusks are much smaller and grow straight with a pointed tip. The lower tusks are worn to a sharp cutting edge by constant contact with the uppers. The tusks are normally used as aids in their digging, but become formidable weapons when attacked by predators. Normally fights among themselves are pushing matches and the tusks are not used. However, when these fights escalate they strike with their tusks and serious injury may result.

Warthogs prefer plains regions and avoid forests, thick bush and mountains. They are found in savannas, woodlands, grasslands and frequently at waterholes where they dig in the marsh and wallow in the mud. Although warthogs dig quite well, they live in burrows that have normally been dug by other animals, preferably Aardvarks. They also use small caves, overhangs in river banks and drain culverts.

The warthog is mainly a grazer, with the bulk of its diet being grass. It has an interesting practice of kneeling on its callused knees to eat and dig up other foods. These include bulbs, tubers and roots. They also eat some fallen fruits and berries and have been known to eat carrion.

Warthogs social organization is very loose and most associations between individuals are temporary. Adult males are normally solitary, while young males form bachelor groups. The most common grouping would be one with one or two females and their piglets. Adult males only join the groups to mate. Warthogs are active during the daylight and lay up in their burrows at night. These burrows are very important as they provide protection against the sun, weather and predators. Fleeing juvenile warthogs pile headlong into their burrows, where adults reverse direction at the last instant and back in so they can use their tusks on pursuers that try to follow them. Senses of smell and hearing are acute, but their eyesight is rather poor. Running with their tails up may help keep them together in the tall grasses with their poor eyesight. Naturally warthogs love to wallow in muddy places, take sand baths and rub their bodies against trees. Breeding season is normally in May and June. Before giving birth to a new litter, the female chases away the liter she has been raising and secludes herself. The litters are born in the burrows where they stay nurturing for the first week. Except for brief excursions after the first week, the piglets remain in the burrow for 6 - 7 weeks. Then they accompany their mother everywhere, filing behind her in a fixed order. They are weaned by 21 weeks of age.