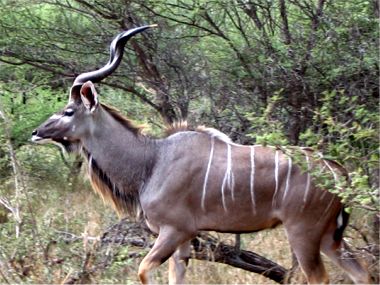 Tall and majestic with the most spectacular horns, one of Africa's most sought after trophies. This animal certainly ranks as one of Africa's most handsome species. Ernest Hemingway called this shy and elusive animal "the gray ghost". The short smooth coat varies in general color from grayish-fawn to grayish brown, with old bulls becoming grayer and their necks becoming darker in the breeding season. Both sexes have a short upright mane from the top of the head to the shoulders, where it forms a crest and continues down the spine. Distinctive features include a white chevron-shaped mark extending from the eyes across the upper nose and exceptionally large pink ears. There are numerous white markings, including 6-10 vertical stripes across the back and down the flanks, variable white patches on the sides of the face and white on the top lip and chin. The black-tipped, bushy tail is white underneath and there are black garters on the upper legs.

Males only, have horns rising from the top of the head in wide spirals with a distinct ridge along their length, diverging slightly as they slant back from the head. The spirals are normally up to 2 1/2 turns, occasionally having 3 full turns. Average horn lengths are between 40” - 56" with lengths longer than 58" being rare. These beautifully shaped horns have long been prized in Africa for use as musical instruments, containers and symbolic ritual objects. Though rare, there have been cases of female Kudu's growing horns that are very unlike the males usually being thin.

Preferred habitat includes mixed scrub woodland, acacia and bush on lowlands, hills and mountains. They are particularly partial to rugged broken country where they have a cover of woodland and a nearby supply of water. They can survive on farms, provided sufficient cover remains.

Feed mainly by browsing and are able to pick out scanty, high quality foods from much poorer surrounding vegetation. They eat fruit, seed pods, flowers and leaves, often choosing plants that others reject because of unpleasant taste. They occasionally graze on new, fresh green grass.

Kudu rely on concealment and spend nearly all their time hidden in thick bush. When disturbed, a kudu will usually stop and listen to assess the situation and then move away quietly or dash off after giving a loud, sharp alarm bark, which is regarded as the loudest of all the antelope species. In flight they run with heads level to the ground with their horns laid back to avoid tangling in branches. Kudu often stop and look back after running for a short distance, which is frequently a fatal habit. Hearing, sight and scent are very well developed. They are tremendous jumpers and can clear a 6 foot fence from a standing position and clear a 9 foot fence under stress. Cows, calves and sub-adults form small family herds, usually with 6-7 and up to 12 members. Adult bulls live alone or in bachelor groups of 2-6, joining female herds in the mating season. Social grooming occurs in both family and bachelor herds. During the mating season, bulls compete for access to females by displays and clashing horns. Dominance is usually quickly and peacefully determined by a lateral display in which one male stands sideways in front of the other and makes himself look as large as possible. If the other is suitably impressed, dominance is established. Males of about the same size and age engage in sparring contests in which they approach one another slowly, lock horns and push back and forth until one gives up. Fights are rare and combatants are very rarely injured, but remains of animals have been found where the two combatants had locked horns in such a way that they could not disengage. The pregnant female departs from her group to give birth in tall grass or any other sufficiently dense cover, where the calf remains concealed for up to 2 months. The mothers visit their hidden offspring on a daily basis until the youngsters are strong enough to join the female herds.