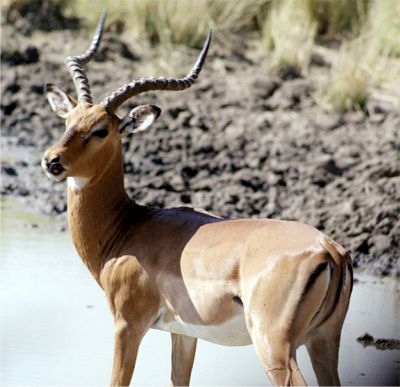 Impala are one of the most numerous antelope in South Africa. They are medium sized and perhaps the most elegant of all African antelope. The majority of African antelope belong to groups of related species, but the Impala is one of a kind. Females are similar to males, but smaller and lack horns. The short glossy coat of the Impala is chestnut brown and distinctly two-toned, being darker on the back and upper flanks and paler on the lower flanks and legs. The belly is white along with the throat, lips, line over the eyes, the inside of the ears and the underside of the tail. There are vertical black stripes down the tail and thighs and the tips of the ears are black. There are distinctive scent glands on the rear legs above the hooves, which are marked by tufts of black hair. The adult male also has scent glands on the forehead.

Only males have horns. These horns are basically shaped like an S, inclining inwards and upwards at the tips. They are ridged on the front strongly ridged on the lower two thirds, smooth toward the gently tapering sharp tips. They grow to lengths of between 18 to 30". It is not the length of the horns that gives a male the advantage, but his condition and weight.

Impala favor the fringe habitats, where Savannah meets woodland or where grassland meets Savannah. They generally avoid open grassland and floodplains and are absent from mountainous areas. Most of these areas have well drained soil, which provides a firm footing. Impala are water independent, but typically live near water in spite of the fact that they do not need to drink very often.

Impala are both grazers and browsers, feeding on grasses and the leaves, flowers and seed pods of shrubs, which enables them to survive in many habitats. When grasses are growing, Impalas will graze only on grass.

Impala are extremely agile and are capable of spectacular leaps. It leaps seeming without effort and sometimes for no apparent reason. When alarmed suddenly the whole herd scatters explosively in all directions with graceful leaps up to 10 feet high and 36 feet long. They jump through narrow gaps in fences and undergrowth. As a runner, the Impala is neither very fleet or enduring. Unlike many other plains grazers, the Impala flees into dense vegetation rather than out into the open grassland, where it hides instead of running away. They have acute hearing and are very alert and wary. Its sense of smell is very good, but its eyesight seems less developed. Female Impala are strictly territorial animals with herds consisting of 20 to 50 or more animals. Territory size varies depending on the season, habitat quality and population density. Males live in bachelor herds with the dominant individuals breaking away to set up territories in proximity to female herds. During the mating season these males form breeding herds, spending all of their time herding the females and defending his herd from other males. After a short period of time these strenuous activities, with little food, the dominant male loses condition and is driven off where he joins a bachelor herd to recuperate and try again to regain his status. Normally not aggressive, during the rut males fight fiercely and serious injury and deaths are not uncommon. Losers are pursued and gored in the flanks if overtaken.

Impala's are a noisy animal, grunting frequently during the day. Alarm call is a loud, high-pitched snort. During the rut, territorial males are extremely vocal, uttering an array of noises from grunts to a roar. This roar has frightened the wits out of more than a few people, as it is often mistaken for the roar of a lion. This roar is used by the territorial male to advertise his status and to prevent females from leaving the breeding herd. This roar sounds like a mixture of a cough and a belch, accomplished with the neck stretched forward and the head tipped upwards. After the mating season, peace and tranquility returns to the herd, and some of the evicted young males return. Females break away from the herd to give birth in isolation. All of the births are within a short period of time in a particular area. This mass arrival is thought to provide safety in numbers. Following birth, the young are left hidden for a day or two, after which they are seldom in close association with their mothers, except when suckling. Social grooming is accomplished between all herd members, including adult males and is an important means of removing ticks from areas that each animal cannot groom for itself. This is done with 2 members facing each other with heads turned 45 degrees. One scrapes the other 4-8 times, then stops and waits for response in kind from the other.